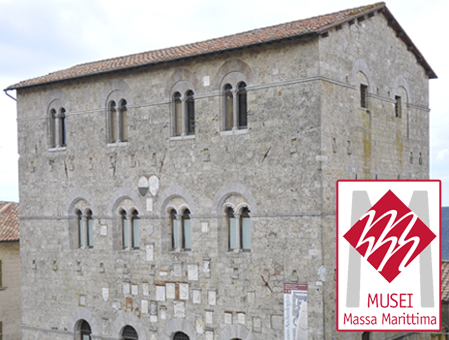 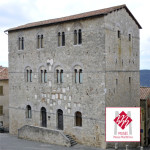 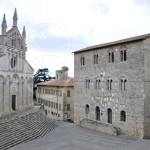 [3] The building, built in Romanesque style and originally crenelated, was erected between 1225 and 1235. The Mayors (Podestà) who governed the City have left their coats of arms on the facade of the building to keep alive, during the centuries, the memory of their actions. On the top of the facade the coats of arms representing Siena: the white and black emblem of the Municipality and the lion surmounted by a crown, a symbol of the Sienese people. Among the doors a ring is visible to which criminals were tied and exposed. Near to the door on the left side of the building, there is a linear incision in the stone, originally intended to contain a metal rod, which was a measure of reference of the Free City, the passo, made up of three braccia. The building currently houses the Archaeological Museum.

The Archaeological Museum of Massa Marittima is housed in the Palace of Podestà, in the Cathedral Square.
Visiting the Archaeological Museum, we can walk again, step by step, along the history of the settlements in the territory of Massa Marittima, starting from the lower Paleolithic to the Etruscan age.
The ground floor is dedicated to Prehistory and hosts many findings collected in the several caves of the territory, showing how remarkable was the attendance of this area during the Prehistoric age. Since 2004, in order to better illustrate to the visitors – especially to the youngest ones – how the inhabitants’ life used to be, a new very impressive mounting was made up: two life sized reconstructions of Prehistoric caves representing the relation man-cave the way it was really experienced during the Prehistory.
You can also find a department dedicated to Archaeospeleology.
Of special interest, inside a niche at the ground floor, you can see the Stele found in the neighbouring area of Vado all’Arancio.At the first floor is the Etruscan section, hosting the findings coming from the excavations made, in several years, in the area of the close Accesa lake. Here, many tombs and an Etruscan settlement of great importance have been brought back to light.
At the moment you can also visit an exhibition about the Etruscan symposium and banquet.