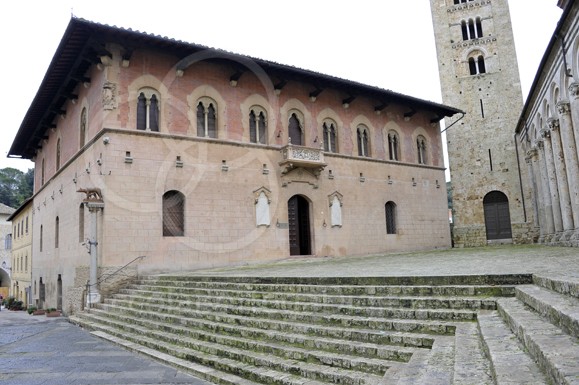 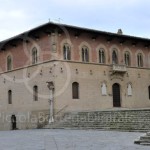 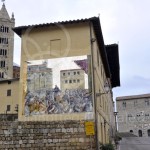 [7] The building, owned by the Opera San Cerbone, upon completion of construction of the Cathedral became the residence of the Vicar of the Mayor who left outside the granite column on which alerts, notices and orders of the authorities were posted. The old people of Massa, until a few years ago, to confirm the veracity of what they were telling, used to say that what they said was true as things written on the column. On this column, in 1474, the City placed a golden wolf as a symbol of Siena. Although still owned by the Opera San Cerbone, since 1603 the palace is the residence of the Bishop of the Diocese of Massa and Populonia, today Diocese of Massa Marittima and Piombino. A major restoration of the early of 1900 gave to the bishopric its present form. On the wall facing the Public Fountain, at the behest of the Bishop of that time, now Cardinal Angelo Comastri, the painter Giampaolo Talani in 1992 painted the fresco The Sermon of Saint Bernardino. In March 1992, the painter went to show his art work to His Holiness John Paul II, at the express request of the Pope.